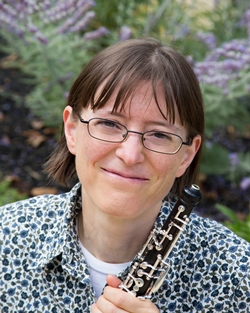 Dr. Sarah Hamilton is Associate Professor of Oboe at the State University of New York, College at Fredonia, where she is a longtime member of the touring Fredonia Woodwind Quintet. She is principal oboe with the Western New York Chamber Orchestra and the English Horn player with the Erie Philharmonic. She has also performed regularly with Bach and Beyond, the Chautauqua Symphony and the Buffalo Philharmonic. Sarah has appeared as a soloist with the Württemberg Chamber Orchestra, the Erie Philharmonic, the Western New York Chamber Orchestra, the Chicago Chamber Orchestra, the Fredonia College Orchestra and Wind Ensemble, and at conventions of the International Double Reed Society. She recently premiered a work for English horn by composer David Finko. Sarah has also given presentations on making the oboe more accessible in public school programs at New York State, Erie County and Chautauqua music teacher association conferences.

In addition to holding positions with the Pro Musica Chamber Orchestra, the Windsor Symphony and the Britt Festivals Orchestra, she was a founding member of the double reed consort OBOHIO and on the faculty of the New England Music Camp. Sarah holds a Doctor of Musical Arts degree from The Ohio State University and a Master of Music degree from Wayne State University where she studied with oboist Robert Sorton. She holds a Bachelor of Music degree from the University of Western Ontario where her teachers included Shelley Heron, Geralyn Giovannetti and Perry Baumen.

Sarah’s former students are teaching in the public and private schools as well as at the college level, freelancing and teaching privately, working as music therapists and are pursuing musical study at a variety of colleges and conservatories. Sarah is married to co-author Mark Dubois.

Mark DuBois holds a Bachelor of Music ’83 and Master’s of Music ’84 in oboe performance from the Cleveland Institute of Music where he studied with oboist John Mack, as well as an Master’s in Education ’97 from the University of Buffalo. In addition to his theory and oboe teaching duties at Fredonia State University, he performs with the Erie Philharmonic, the Buffalo Philharmonic Orchestra, and the Western New York Chamber Orchestra. He additionally performs as an accompanying pianist for student recitals at Fredonia State, as well as occasionally accompanying his colleagues on faculty recitals.He served as principal oboist with the Flint Symphony Orchestra in Michigan from 1984-1992, while performing as extra and substitute with the Detroit Symphony Orchestra and teaching a large private studio of oboists.

Mark’s former students have gone on to further musical activities including principal oboe in the Atlanta, Orlando and Florida West Coast Symphonies, section playing in the Virginia Symphony, teaching on the faculty at Larchmont Music Academy and the Blair School of Music, and musical study at various colleges and conservatories. Mark is married to co-author Sarah Hamilton.