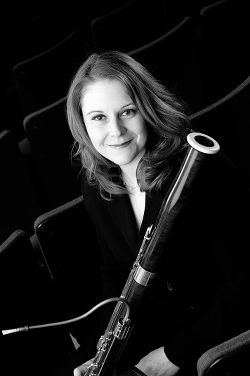 Jenny Mann is Associate Professor of Bassoon at The University of Alabama. She is also Principal Bassoonist with the Tuscaloosa Symphony and an active performer in regional orchestras and chamber ensembles. In addition to her teaching, Dr. Mann coordinates the thriving Chamber Music Program at The University of Alabama, which incorporates extensive educational outreach experiences.

Dr. Mann is a member of the Cavell Reed Trio and Capstone Woodwind Quintet that perform around the country and are committed to furthering both genres through the commissioning of new works and recording. In evidence of this commitment, “The Art of Collective Invention,” a new recording by the Cavell Trio, was released in April 2012 by Blue Griffin Records. The disc includes both premiere recordings and centerpieces of the genre. It is currently available at blugriffinrecords.com, amazon.com and the iTunes music store. The trio recently completed their second recording “Dialog” to be released in April of 2014.

Dr. Mann has performed throughout the country as a chamber musician and soloist, including the 2011, 2012 and 2013 International Double Reed Society Conferences, the National Flute Association Conference and the 2012 and 2013 International Clarinetfest She has performed with the symphonies of Alabama, San Antonio, Syracuse, Austin, and Huntsville and as a soloist with the Tuscaloosa Symphony and the Hot Springs Music Festival Orchestra. Dr. Mann is also the bassoon mentor at the Hot Springs Summer Music Festival, as well as a member of their chamber music series. See www.hotmusic.org for more information.

Dr. Mann studied with Kristin Wolfe Jensen, John Hunt, David Van Hoesen, Jennifer Speck, Kent Moore and Janis McKay. She holds a Bachelor of Music Education degree from Baylor University and a Master of Music degree from the University of Texas at Austin. She began her doctoral studies at the Eastman School of Music and completed them at The University of Texas at Austin. Dr. Mann continues to be an active clinician and teacher of young musicians.